We are writing to you to express our deep disappointment that South Miami-Dade Cultural Arts Center has chosen to offer a platform to Igor Butman, a prominent and vocal supporter of Russia’s criminal regime as a whole and of Russian President Putin personally. It is more than unfortunate that at the time when the United States is providing military aid to Ukraine for the express purpose of enabling it to effectively resist Russian military aggression, and when prominent musical venues such as the RegattaBar in Cambridge and Blue Llama Jazz Club in Ann Arbor are cancelling performances by Mr. Butman, South Miami-Dade Cultural Arts Center is jeopardizing its reputation in the community by affirmatively choosing to host this emissary of Russian aggression.

In March 2014, Mr. Butman was among the 511 Russian cultural figures who signed a letter in support of the policies of the Russian President Putin on Ukraine and Crimea—policies of occupation and annexation that are illegal under international law and are specifically condemned by the United States. The letter is available at the website of the Ministry of Culture of the Russian Federation. An English translation is available here: Mr. Butman’s signature is number 63.)

These policies, still unequivocally supported by Mr. Butman, have since resulted in thousands dead Ukrainian civilians and soldiers, hundreds of thousands injured, and millions displaced. These are the same policies that led directly to the murder of 298 passengers of the Malaysian Airlines Flight 17 by a Russian BUK missile in July of 2014. Despite international condemnation and mounting human and infrastructure costs, both to Ukraine and to Russia, in the five and a half years since Mr. Butman signed the letter, he has not taken any steps to repudiate the policy or to withdraw his signatures.

To the contrary, Igor Butman continues to be a proud and devoted supporter of Vladimir Putin and his policies and continues to take actions to support and legitimize Russian aggression in Ukraine. For example, despite being personally warned by the U.S. State Department that as a US citizen he should not attend a jazz festival in Russian-occupied Crimea (as that would be in violation of the US and EU sanctions), Mr. Butman went to Crimea as a self-proclaimed “messenger of peace,” hypocritically claiming that jazz is above politics.

Mr. Butman also participates in more informal but no less significant events where he leverages his artistic reputation to support Russia’s authoritarian leader. For example, he regularly participates in staged hockey games with Mr. Putin, former Russian national team players, and other celebrities. These spectacles are produced for one purpose only— to strengthen Mr. Putin’s domestic popularity. 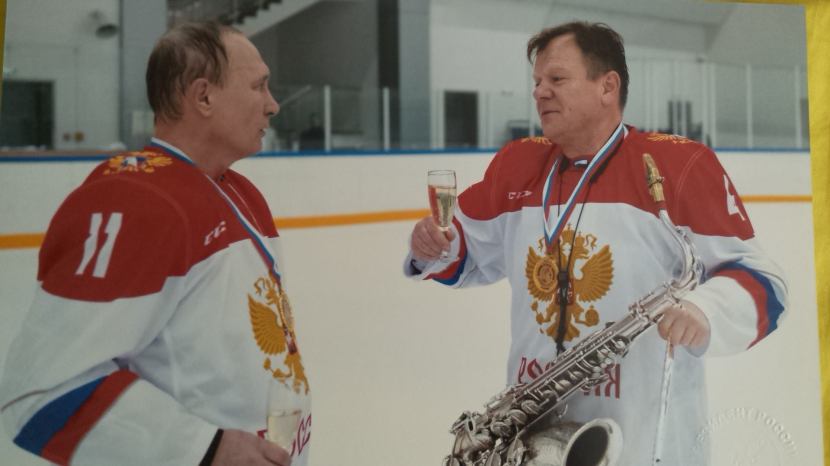 Similar to many other cultural figures loyal to Mr. Putin, Mr. Butman seeks to have it both ways — he wants to use his artistic reputation to support the bloody regime for Russian domestic consumption, while presenting himself to his international audiences as an emissary of peace through culture. We call upon you to not enable this sick game by lending Mr. Butman your stage.

We would also like to highlight Mr. Butman’s cynical view of his US citizenship. In 2015, as reported by RIA News, Mr. Butman stated that he applied for American citizenship for the convenience that it offered him in traveling the world without the need for visas. This was in response to the Alexei Navalny, a prominent opposition leader in Russia, who questioned Mr. Butman’s commitment to the US by pointing out that the citizenship oath taken by Mr. Butman upon his naturalization contains a promise to take up arms to defend the homeland if necessary. Mr. Navalny rightfully noted that it was doubtful that a member of the Supreme Council of Mr. Putin’s party has any intention to defend the US in any way.

Mr. Butman’s attitude is offensive to us as naturalized American citizens who cherish the rights and obligations of our citizenship. As people who also took that very same oath, we would further note that the oath begins with an unequivocal renunciation of  “all allegiance and fidelity to any foreign prince, potentate, state, or sovereignty, of whom or which [the person taking the oath had] theretofore been a subject or citizen…” A seat on the Supreme Council of United Russia does not seem to be in keeping with this oath. It is noteworthy that United Russia is known internationally not only for being Mr. Putin’s party, but also for its endorsement of Russia’s anti-gay law, the law prohibiting international adoption of Russian children, the law decriminalizing domestic abuse, and other laws contrary to International norms for human rights.

About Igor Butman and Arts Against Aggression:

The New York Times: Has a U.S. College Given Russia Too Friendly a Platform?

Opinion: Hosting a Concert of Putin-supporting Musicians In College in Boston is “Undignified”, Alumni Says